We have different levels of teams that are explained below in more detail:
National Elite, National, Regional,Local and Academy.
for boys and girls ages 6-18.

will be available by September 19th, 2022.
You can see last year's totals below.

One of our AEVC goals is to give as many players the opportunity to play. With that being said, below is a link to submit a AEVC Financial Aid Application for this upcoming season. If you feel that you qualify to receive Financial Aid, please fill out the form in its entirety.

Financial Aid Applications are due by Thursday, October 13th.

Please note: Financial Aid is not guaranteed to any athlete. Applications will be accepted after October 13th but scholarship monies may not be available. If you have not applied and are in need of an application, please contact jackie@aevc.org. 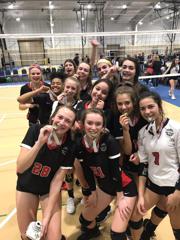 What’s the difference between Club Volleyball and Academy Volleyball?

Club Volleyball at AEVC is very competitive. Tryouts are held the second weekend of October for all 14 & Under athletes and the first full weekend of November for all 15 & Older athletes. At tryouts, Coaches evaluate players and look to find 10-12 players to make a well-balanced team. Tryouts are intense and fast paced. Coaches will work with the girls to see who mentally and physically would be a good fit on their team. Once teams are created, practices then start post Commitment Night and Player Bootcamp. The season runs from November through April with at least two practices a week. Club Volleyball is a commitment and Coaches take attendance each and every practice to ensure that their team is staying loyal and committed. The team participates anywhere from 4-11 tournaments, depending on level, from January through April, with some being single day and some being two- or three-day tournaments. Teams will compete with other local teams that consist of some of the top players in our area. Tournaments range from being local, to traveling to nation-wide, depending on level. All National level teams, excluding 10s, 11s and 18s, tournament and practice schedule extends through the end of June.

What are some things coaches look for at Club Volleyball Tryouts?

Sound intense? Maybe a better fit for you would be our Academy program here at AEVC.  Academy is a co-ed volleyball league for ages 8-16. This program takes place on the weekends and is structured around development and putting skills they have learned into real live games.  Coaches in this league are all AEVC staff with plenty of volleyball experience and knowledge.  While this program is for both beginners up to intermediate skill level athletes, this program will include practices and skills trainings to assist with the development of the player’s overall game. Our Academy program starts off with the first week being evaluations and discussions on what to expect from Academy throughout the season. Over the course of the first few weeks, each player will be evaluated by the coaches on their overall game, passing, setting, hitting and serving. Once evaluations are complete, coaches then take the time to converse and create teams that are fair and even. Week 4 or 5 is a week where you get to practice with your team and then games/tournaments begin on weekend days throughout the next few months. Players that participate in our Academy program all receive fair and equal playing time.

What will my son/daughter gain from the Academy Program?

Tryouts are required for Club Volleyball. No Tryout is required to participate in Academy.
See you at tryouts!